“When is enough finally enough?”
National Indigenous Day of Prayer

Today is the 21st of June. Yesterday was the Summer Solstice, or the longest day of the year. Today we gather to recognise Indigenous People from across Canada.
In 2019 I had the opportunity to attend Corey Payette’s musical, “Children of God”.
When I heard that a musical had been written about Residential Schools, I was
simultaneously horrified and transfixed.

I was born in London, Ontario and raised in Sudbury, Ontario. As a child I don’t think I ever saw an Indigenous person. Once we moved to Northern Ontario I not only saw Indigenous people, they were my classmates, friends and teachers.

In our first reading from Isaiah we hear:
“Have you not known? Have you not heard?
The Lord is the everlasting God,
the Creator of the ends of the earth.
He does not faint or grow weary;
his understanding is unsearchable.
He gives power to the faint,
and strengthens the powerless.
Even youths will faint and be weary,
and the young will fall exhausted;
but those who wait for the Lord shall renew their strength,
they shall mount up with wings like eagles,
they shall run and not be weary,
they shall walk and not faint.” (Isaiah 40.27-31, NRSV)

In the musical there are two main characters, Tom and Julia, brother and sister who are taken from their homes in Northern Ontario and placed in a residential school. They are taught, indoctrinated and punished by Father Christopher and Sister Bernadette who sing that their job is to “take the Indian out of the child.” The children are subject to daily lessons in how to be white and Christian. They are forbidden to speak their own language or sing the songs of their childhood. Any attempt to do so, is met with strict and severe punishment.

The children live in dormitories. In the show they are costumed in grey dresses for the girls and grey shirts and pants for the boys. And yet, despite the desolate and dark place in which they live, there are elements of joy in their days. Indigenous culture relates to God as Creator. This is echoed in the reading from Isaiah.
“the creator of the ends of the earth”. God promises to give strength to the weary, a
promise that they will run and not be weary, walk and not faint”. Jesus is often referred to as brother. What a beautiful, relational way in which to regard him.

Julia, Tom’s sister, is known as “a runner”. She has tried escaping from the residential school several times. She is bright and determined that she is going to get back home. She’s memorized the path and knows where to step to not make the step squeak. She knows where the apples are plentiful and where the bend in the road is that will take her to the train tracks. If she misses the bend in the road, she ends up at the highway and will certainly be caught and brought back to the school where she will be punished. At one pivotal moment in the musical, Julia has been caught running away. She is taken to the basement where there is an empty cot, with only a mattress on it. Father Christopher comes down to see her, and after berating her, he rapes her as punishment. When Julia raped, both she and Father Christopher remain fully clothed. He sings of what he must do so she will learn, while removing his rope cincture. He stands behind her and she moves around him, eventually taking one end of the cincture. He slowly wraps it around her, never actually touching her, but with the tone of the music, and the spectacular lighting, you understand what is happening. It was visually stunning and emotionally devastating to witness.

Julia becomes pregnant and is forced to have an abortion. She is left very weak and ill. And rather than bring disgrace on her family, she dies by suicide. This scene is her in relief, illuminated from behind. She’s gone to a shed and she appears for a split second illuminated in shadow, as she hangs herself. This was such a shock I gasped out loud in the theatre.

Throughout the musical there is the theme “Gimikwenden Ina”, Do you remember. This question is asked again and again. Do you remember? Do you hear them calling you? The students are told that Julia died from influenza. They are not permitted to mourn for her, rather they gather in the Chapel, forced onto their knees to sing a reprise of Pater Noster. Unfamiliar words sung by children who have lost their home, their language, and even their name. Their hair has been cut, their moccasins have been removed and hard soled shoes have been shoved on their feet.

In the gospel for today, we hear “From his fullness we have all received, grace upon
grace. The law indeed was given through Moses; grace and truth came through Jesus
Christ. No one has ever seen God. It is God the only Son, who is close to the Father’s
heart, who has made him known.” (John 1.17-19, NRSV)

Even when these helpless children were being stripped of their identities…even when
they had their hair cut and were given new clothes and strange names, God the Creator was with them. It was not God’s will that these children were taken. It was not in God’s name that these children were to be “civilised”. That desire was strictly Man-made. Settler-made. White-skinned male made. Church and Government-made.
Now, lest we think that this happened hundreds of years ago, the last Residential School closed in British Columbia in 1986 and in Canada in 1996. The St. Eugene Resort outside of Cranbrook is the only Indian Residential School to be converted from a school into a fashionable resort. The story of devastation has been preserved and the stories continue to be told. There is a museum onsite that talks about the Residential School and the transformation of the space from devastation to remembrance.

So with all these apologies and restorations, it’s all over now, right? Enough is enough? No. Not even close. There continues to be systemic racism in Canada against Indigenous peoples, the First Peoples of this country. The Doctrine of Discovery was written in 1493. It is a document that states the land ‘discovered’ by Christopher Columbus was “empty” even though he saw First Nations peoples living peaceable lives. This is why it is necessary for those of us who are not First Nations to refer to ourselves as settlers. The land on which we stand is not our land.

I must believe, that with all the indignity that these innocent children suffered, at the
hands of those that were meant to care for them, that God was with them. The Creator was holding them as they wept, terrified and lonely, in the dark. The Spirit of God remained with them as they passed from death to eternal life. I must believe that they knew how much they were loved by the Creator. I must believe they ultimately found peace.

Here we are, only 24 years since the last Residential School closed. We have not yet
learned. There are daily reminders of the divide between settlers and Indigenous people. Violence against and within Indigenous communities is all too frequent. I was born in Canada, yet I am a settler.

If we are ever to realise and move through the work of the Truth and Reconciliation
Commission, we must acknowledge the damage caused to generations of First Nations peoples. We must be willing to listen and engage in difficult conversations. “Children of God” was a step in that direction. If you have opportunity to see it, please do. It will fill you with hope, with rage and with conflict, yet it will be one of the best pieces of theatre you have ever seen. After each performance many of the cast gather to talk to and with the audience on the work of reconciliation.

We recognise today as a day to celebrate the rich cultural heritage of the Indigenous and Métis communities in Canada. Each week before we begin Worship, we give thanks and acknowledge that the ground on which we gather does not belong to “the Church”, rather it belongs to the Ktunaxa people. We pledge to be good and gracious hosts in this corner of Creation. We remember our baptismal vows to “respect the dignity of every human being”. Every human being. God does not have step-children. All are created in God’s image. And all are deeply, completely and unconditionally loved. Thanks be to God. Miigwech* 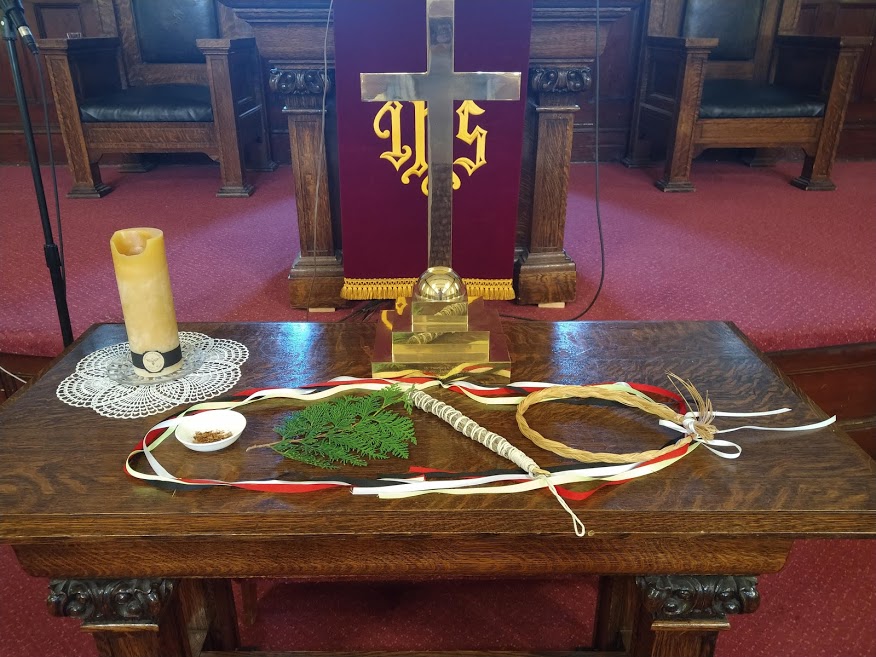